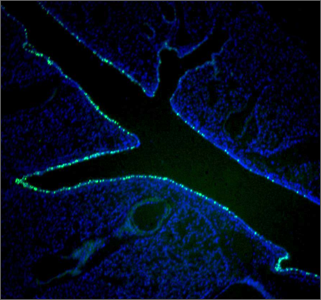 Genome editing materials can’t just breeze into cells. Or can they? Even cells so well defended as lung and airway cells may admit wisps of genome editing proteins such as CRISPR-associated nucleases. All that’s needed is an inspired delivery method. One possibility is the aerosolization of amphiphilic peptides.

Amphiphilic peptides combine hydrophilic and lipophilic properties and facilitate the translocation of proteins across membranes. These peptides are being evaluated for various applications, including genome editing. In fact, scientists from the University of Iowa, in collaboration with scientists from Feldan Therapeutics, recently used engineered amphiphilic peptides to deliver genome editing nucleases and ribonucleoproteins to cultured human airway epithelial cells and mouse lungs.

Details appeared October 28 in the journal Nature Communications, in an article titled, “Engineered amphiphilic peptides enable delivery of proteins and CRISPR-associated nucleases to airway epithelia.” The article suggests that engineered amphiphilic peptides, or “shuttle” peptides, may be an attractive alternative to viral and nonviral vector systems, which have difficulty transducing cells of the respiratory epithelium, which is protected by specialized cell types, secreted host defense factors, and mucociliary transport.

The scientists, led by the University of Iowa’s Paul B. McCray, Jr, MD, added that gene editing proteins were co-incubated with engineered peptides and delivered without causing harm to the cells or the mice, and that gene editing subsequently occurred at levels that may be clinically useful.

“There is a lot of excitement about the possibility of using gene editing in medicine to treat diseases by repairing or modifying disease-causing mutations,” said McCray. “But the issue is that we have to be able to safely deliver the materials. This research is one step in that path.”

McCray and his University of Iowa colleagues worked with Feldan Therapeutics’ David Guay, PhD, and Tomas Del’Guidice, PhD. In the current study, the collaborators used a Feldan platform that combined cell-penetrating peptides and endosomolytic peptides. This platform helped increase the cytosolic distribution of translocated proteins by reducing endosomal entrapment.

A press release issued by Feldan noted that the company has been working closely with McCray’s team on the delivery of proteins to airway cells and in vivo models, aiming to advance new therapeutic avenues in the treatment of pulmonary diseases such as cystic fibrosis, asthma, and chronic obstructive pulmonary disease.

“The use of Cas ribonucleoprotein rather than coding mRNA or DNA offers advantages in a therapeutic context by limiting genome exposure to editing machinery and decreasing off-target events,” the authors of the Nature Communications article noted. “[Our study suggests] that engineered peptides confer effective and nontoxic protein and Cas9 or Cas12a ribonucleoprotein transfer into airway epithelia in vitro and in vivo.

“The technology represents a versatile delivery strategy for therapies and to address biological questions. This provides a breakthrough approach for hard-to-transduce cell types and may serve as a platform for further design opportunities with other cargoes including therapeutic antibodies and peptides.”