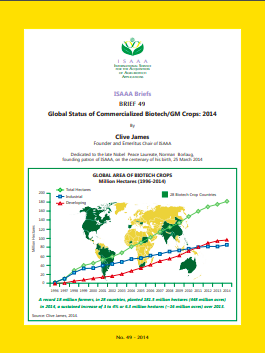 FACT # 2. Number of farmers planting biotech crops. In 2014, 18 million farmers, of which 90% were small and poor, planted a record 181 million hectares of biotech crops in 28 countries. Farmers are the masters of risk-aversion and improve productivity through sustainable intensification (confining cultivation to the 1.5 billion hectares of cropland, thereby saving the forests and biodiversity). Thus, 7.1 million small farmers in China and 7.7 million in India elected to plant over 15 million hectares of Bt cotton in 2014 because of the significant benefits it offers. Similarly in 2014, 415,000 small farmers in the Philippines benefited from biotech maize.

FACT # 3. Strong political will allowed Bangladesh to commercialize Bt brinjal (eggplant) for the first time. Notably, Bangladesh, a small poor country with 150 million people, approved the prized vegetable Bt brinjal/eggplant on 30 October 2013, and in record time – less than 100 days after approval – small farmers planted Bt brinjal on 22 January 2014. This feat could not have been achieved without strong Government support and political will, particularly from the Minister of Agriculture Matia Chowdhury – the experience is exemplary for small poor countries. Bangladesh is already field testing biotech potatoes and exploring biotech cotton and rice.

FACT # 4. Some of the ”new” biotech crops, recently approved for planting, include  food staples – potato in the US and the vegetable brinjal (eggplant) in Bangladesh. In 2014, the US approved two “new” biotech crops for cultivation: Innate™ potato, a food staple with lower levels of acrylamide, a potential carcinogen, and less wastage due to bruising; and a reduced lignin alfalfa event KK179 (HarvXtra™) with higher digestibility and yield (alfalfa is #1 forage crop in the world). Indonesia approved a drought tolerant sugarcane. Brazil approved Cultivance™, a HT soybean, and a home-grown virus resistant bean, ready for planting in 2016. Vietnam approved biotech maize (HT and IR) for the first time in 2014. In addition to the current biotech food crops which directly benefit consumers (white maize in South Africa, sugar beet and sweet corn in the US and Canada, and papaya and squash in the US) new biotech food crops include the queen of the vegetables (brinjal) in Bangladesh and potato in the US – potato is the fourth most important food staple globally and can contribute to food security in countries like China (6 million hectares of potato), India (2 million) and the EU (~2 million).

FACT # 6. The first biotech drought tolerant maize planted in the US in 2013 increased more than 5-fold in 2014. Biotech DroughtGard™ tolerant maize, first planted in the US in 2013, increased 5.5-fold from 50,000 hectares in 2013 to 275,000 hectares in 2014 reflecting farmer acceptance – the same event was donated to the public-private partnership, Water Efficient Maize for Africa (WEMA) aimed at delivering  biotech drought tolerant maize to selected countries in Africa by 2017.

FACT # 7. Status of biotech crops in Africa. The continent continued to make progress with South Africa, marginally lower at 2.7 million hectares mainly due to drought. Sudan increased Bt cotton hectarage by almost 50%, whilst drought precluded a potentially higher hectarage than 0.5 million hectares in Burkina Faso. An additional seven countries (Cameroon, Egypt, Ghana, Kenya, Malawi, Nigeria and Uganda) conducted field trials on pro-poor crops, the penultimate step prior to approval. Importantly, the WEMA project is scheduled to deliver the first stacked biotech drought tolerant (DT) maize with insect control (Bt) in South Africa in 2017. Lack of science-based and cost/time-effective regulatory systems is the major constraint to adoption. Responsible, rigorous but not onerous, regulation is urgently needed to suit the needs of small famers and poor developing countries.

FACT # 8. Status of biotech crops in the EU. Five EU countries continued to plant 143,016 hectares down marginally by 3% from 2013. Spain led with 131,538 hectares of Bt maize, down 3% from 2013, but with a record 31.6% adoption. In summary, there were modest increases in three EU countries and slight decreases in two countries, due mainly to less planting of maize and bureaucracy.

FACT # 9. Benefits offered by biotech crops. A new 2014 global meta-analysis confirmed significant multiple benefits, during the last 20 years. A global meta-analysis of 147 studies in the last 20 years, confirmed that “on average GM technology adoption has reduced chemical pesticide use by 37%, increased crop yields by 22%, and increased farmer profits by 68%.” These findings corroborate earlier and consistent results from other annual global studies. The latest provisional data for 1996 to 2013, showed that biotech crops contributed to Food Security, Sustainability and Environment/Climate Change by: increasing crop production valued at US$133 billion; providing a better environment, by saving ~500 million kg a.i. of pesticides from 1996 to 2012; in 2013 alone reducing CO2 emissions by 28 billion kg, equivalent to taking 12.4 million cars off the road for one year; conserving biodiversity by saving 132 million hectares of land from 1996-2013; and helped alleviate poverty for >16.5 million small farmers and their families totaling >65 million people, who are some of the poorest people in the world. Biotech crops are essential but are not a panacea – adherence to good farming practices such as rotations and resistance management, are a must for biotech crops as they are for conventional crops.

FACT # 10. Future Prospects. Cautiously optimistic with modest annual gains expected due to the already high rates of adoption (90% to 100%) in the current principal biotech crops, leaving little room for expansion in mature markets in both developing and industrial countries. The pipeline is full of new biotech crop products which could (subject to regulatory approval for planting and import) be available during the next 5 years or so ‒ a list of over 70 potential products are listed in the full Brief. They include, a broad range of new crops and traits as well as products with multiple modes of resistance to pests/diseases and tolerance to herbicides; Golden Rice is progressing with field testing and late-blight resistant potatoes are being field tested in Bangladesh, Indonesia, and India. In the US, Simplot has already requested approval for an enhanced Innate™ potato with late-blight resistance and lowered reducing sugars; pro-poor crops, particularly in Africa, such as fortified bananas and pest resistant cowpea, look promising; public-private partnerships (PPP) have been relatively successful in developing and delivering approved products ‒ four PPP case studies, featuring a broad range of different crops and traits in all three continents of the South, are reviewed in the full Brief.

ISAAA is a not-for-profit organization, sponsored by public and private sector organizations. All biotech crops hectare estimates reported in all ISAAA publications are only counted once, irrespective of how many traits are incorporated in the crops. Detailed information is provided in ISAAA Brief 49 “Global Status of Commercialized Biotech/GM Crops: 2014”, authored by Clive James. For further information, please visit http://www.isaaa.org or contact ISAAA SEAsiaCenter at +63 49 536 7216, or email to info@isaaa.org.